UM Provost Thomas J. LeBlanc looked out at the gathering of scientists, researchers, students, and government officials and told them the issues of climate change and sustainability “are first and foremost on everyone’s mind” at the University of Miami. So it was appropriate that on Friday,  November 13, 2015, the University’s Rosenstiel School of Marine and Atmospheric Science (RSMAS) co-hosted a conference on climate change with the Intergovernmental Panel on Climate Change—the international Geneva-based organization created by the United Nations to educate the world about climate change and its impact.

LeBlanc, the University’s executive vice president and provost, noted that nearly all of the University’s 11 schools and colleges are involved in some way with researching and evaluating sustainability and climate change. “We think of Miami as ground zero on climate change,” LeBlanc told the more than 200 people at the BankUnited Center’s Fieldhouse. “Miami, in some ways, is a model for every coastal city.”

Much of the ongoing research at the Rosenstiel School examines the current and future impacts of climate change on the South Florida region and beyond. Brian Soden, a professor and associate dean at Rosenstiel, showed a clip from a 1950s science film that talked about sea level rise and its effect on the United States. Even back then, the film singled out Miami as most vulnerable to being submerged by intruding waters. The region, Soden said, is projected in coming decades to see rising temperatures and rising sea water levels. Add in storm surge during catastrophic events like hurricanes, and there is great concern about the devastation that can occur.
Friday’s one-day conference, titled “The Gathering Threat of Climate Change and Its Implications for Water Security and Sea Level Rise,” included speakers from Florida, Europe, the Caribbean, and Asia. They outlined findings from the IPCC’s latest assessment report on the impacts of climate change, and talked about how climate change will also take its toll on economies and cultures. RSMAS professor Ben Kirtman, the lead author of one of the key sections of the IPCC’s fifth assessment report, and Director of CCS’s Climate & Environmental Hazards Program, said there have been unprecedented changes in climate and sea levels between the 1950s and now. And, its repercussions, he said, are expected to continue to escalate. 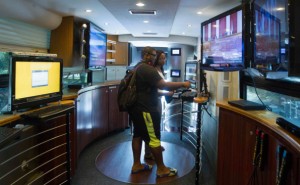 Arriving the day before, C-SPAN’s award-winning, 45-foot customized bus made a stop on UM’s Coral Gables campus on Thursday, giving students an opportunity to step aboard and learn about the public affairs network’s programs and resources, including its in-depth coverage of the U.S. Congress, White House, federal courts, and the American political process. Through interactive exhibits and a customized 2016 campaign app, students also learned about C-SPAN’s Campaign 2016 coverage; its new history series, Landmark Cases: Historic Supreme Court Decisions; and the network’s free comprehensive online educational resources, including C-SPAN.org.  The scheduled stop was part of C-SPAN’s Sunshine State Tour of Florida universities and the Miami Book Fair International. Before students toured the bus, Prof. Kirtman participated in C-SPAN’s flagship morning call-in program, Washington Journal (watch the video), via the mobile studio on the bus. During the segment, Kirtman discussed climate change and other topics while taking calls from C-SPAN viewers. View the slideshow.