Building on the immense resources and expanding the vision of the Center for Computational Science (CCS), the University has established the Miami Institute for Data Science and Computing (IDSC “i-disc”) to catalyze data-intensive research that will solve real-world problems and enhance the understanding of data science among students and the public. Institute members will help infuse data science into instructional programs across the University, ensuring students graduate with a degree of data-savviness—if not a new Master’s in Data Science.

Generated in vast amounts every day, data is the new coin of the realm, the currency fueling innovation and discovery and changing nearly every field and facet of life. At the University of Miami alone, the amount of data amassed by faculty and staff members searching for medical cures, planning smart cities, predicting extreme weather, and pursuing a myriad of other advances has almost doubled in the past few years.

“The volume, variety, and velocity of data have reached unprecedented and, indeed, extraordinary levels, transforming the world and creating numerous opportunities for innovation and human progress,” said Jeffrey Duerk (pictured below), Executive Vice President for Academic Affairs and Provost. “Acknowledging this extraordinary opportunity, the Center for Computational Science is becoming the Miami Institute for Data Science and Computing to transform the University into a leader in data science—encompassing research, education, ethics, workforce training, and service—through cross-disciplinary, industrial, and governmental collaborations, and in interactions with local and global communities.” 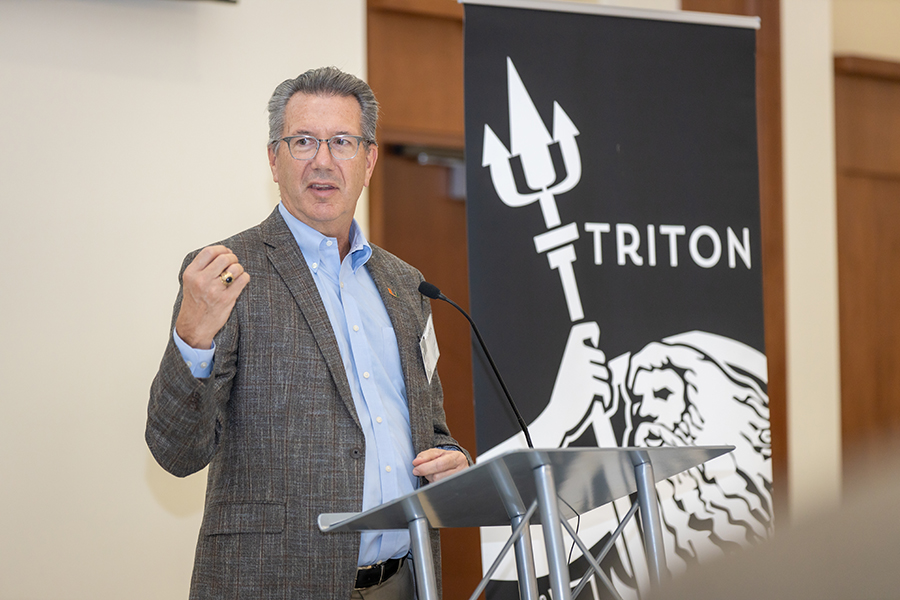 The new Institute is the second of a group of synergistic research enterprises that will be coordinated under the umbrella of the Frost Institutes for Science and Engineering, which began with the $100-million gift from the University’s longtime benefactors, Phillip and Patricia Frost, and the establishment of the Frost Institute of Chemistry and Molecular Science. Led by Nicholas Tsinoremas, the founding director of the Center for Computational Science (CCS), who has been appointed vice provost for research computing and data, the new institute is housed in CCS’ Gables One Tower office. But, as Tsinoremas noted, IDSC (pronounced i-disk) will transcend any physical space because, like the burgeoning field of data science, the institute’s footprint will extend across and beyond the University, pulling together such diverse and multidisciplinary fields as computer science, statistics, biomedicine, environmental science, and the humanities and arts, and partnering with local governments, industry, and other institutions.

“Data science is a relatively new field, but it is becoming essential to every discipline because there is data everywhere and for everything. It is the new currency,” Tsinoremas said. “We also have new technologies—like artificial intelligence and machine learning—that are creating new ways to extract information and gain insights from complex data sets to solve complex problems. So, IDSC members will be everywhere, in every school and college, and engage the research community at the University to actually produce more data and utilize it more effectively.”

Organized around thematic research programs, including one for Artificial Intelligence (AI) and Machine Learning, the institute will recruit highly skilled and collaborative data scientists from leading programs and industries to help the UM community and its government and industry partners with their data science needs. But, Tsinoremas said, the University is already uniquely positioned to transform itself into a preeminent data science leader because IDSC will build on the CCS’s vast and unique resources.

Since its inception in 2007, CCS has attracted more than 1,500 users and established a state-of-the-art research computing infrastructure that, today, is unlike that at any other academic institution. CCS’s advanced computing and software engineering platforms already had considerable expertise in managing high-level data and creating software applications to support clinical research, drug discovery, genomics, mapping and urban planning, observational biology/ecology, and digital humanities. But, in anticipation of CCS’s elevated role as an institute, the University began investing a few years ago in the infrastructure and relationships that will drive data science research, applications, and education and training inside the University and beyond.

Catapulting CCS into a league of its own, the University recently installed Triton, one of the fastest supercomputers in the nation that, customized for UM by IBM, can process artificial intelligence and machine learning workloads in real time. And in an agreement with AT&T, the University is about to become the first academic institution to deploy AT&T’s 5G+ and Multi-access Edge Computing technology, which will deliver more data, including pictures and videos, from the internet to wireless devices at a faster pace. “So, basically that means you will have a supercomputer on your phone,” Tsinoremas said.

Also unique to IDSC will be its research program on Data Ethics and Society, which building on the University’s Ethics Programs and Institute for Bioethics and Health Policy, will foster discussions and seek solutions to the moral and ethical challenges raised by the use and users of ever-expanding data and intelligent machines. As Tsinoremas noted, anyone who surfs the internet, summons an Uber, questions Alexa, engages on social media, or has smart appliances in their home creates and contributes reams of AI data already used for marketing, advertising, and tracking purposes. That’s why one of IDSC’s core missions is promoting an interest in and understanding of data science, not only among future specialists, but among students in every discipline and the public at large. In collaboration with other schools and colleges, CCS spearheaded the approval of a new master’s degree in data science that, beginning this fall, will be offered with tracks in visualization, data science, smart cities, and atmospheric science.

Working with the College of Arts and Sciences’ Department of Computer Science, the College of Engineering’s Department of Electrical and Computer Engineering, and the School of Communication’s Interactive Media Program, IDSC members also will help infuse data science in instructional programs across the University—including those not specializing in data science. “We will advocate for data science education for every student at the University because every student needs to be data science-savvy,” Tsinoremas stated. “Like each of us, every student already works with data, contributes data, or depends on data, and needs some understanding of data, machine learning, and artificial intelligence and what they do.”

Additional IDSC research programs will leverage many of the University’s other strengths. CCS will continue to provide the infrastructure for short- and long-term technical consultations and support high-performance computing and software engineering for the Institute.

The research program focused on Data Driven Discovery in Atmosphere, Ocean, and Earth Science will capitalize on Miami’s geographic location on the frontlines of climate change and the Rosenstiel School of Marine and Atmospheric Sciences’ unique tools, technologies, and talent for observing and predicting atmospheric and oceanic processes that affect human well-being and the built and natural environments.

The research program on Visualization, Data Communication, and Information Design will help researchers communicate their findings to stakeholders and the public as well as play a key educational role, raising awareness about data science and its many applications.

In addition to the four inaugural programs, IDSC is launching research programs focused on Data Driven Discovery for Biological Sciences and Health Care, and Urban Lab and Smart Cities. But as Duerk noted, new research programs could develop and existing ones could be discontinued as the institute—and data science—evolve. “The Institute cannot commit to a fixed set of research initiatives because it must and will be responsive to emerging research needs and trends,” Duerk said. “It will evolve along with the mission and excellence of the University.”