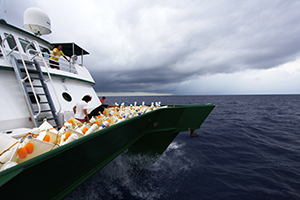 At least one CCS Member is doing fieldwork for three weeks this summer in the Gulf of Mexico as part of a multi-institution research project to study ocean flow. Funded by BP through the Gulf of Mexico Research Initiative, Dr. Tamay Ozgokmen is the project director of the Consortium for Advanced Research on Transport of Hydrocarbon in the Environment (CARTHE) looking at how the Gulf waters transport things like oil or other pollutants.

In truth, CCS is intimately involved in University of Miami’s Grand Lagrangian Deployment aka GLAD; it is the largest oceanic dispersion experiment of its kind to explore surface flows near the Deepwater Horizon Gulf oil spill site, sponsored by the Gulf of Mexico Research Initiative. In particular, CCS Scientists Chris Mader, Warner Baringer and Joel Zysman are overseeing real-time data management from the information arriving from 300 drifting buoys every five minutes and providing logistic support to scientists on board of UM Rosenstiel School’s R/V Walton Smith. Real-time data management is a critical component of GLAD as drifters are targeted based on ocean features and will be retrieved at least once during GLAD.

These “drifters” simply consist of PVC pipes with attached sails and GPS monitoring devices, and by tracking their movement the researchers hope to ground-truth models that estimate how surface winds, currents and other variables work together to move things like oil spills. The team deployed 90 “drifters” over the past week, which already is much more than most studies, which usually deploy 10-20 drifters total. 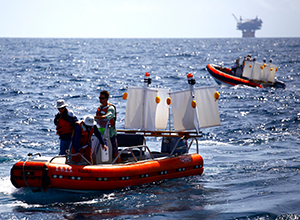 “The ocean model predictions were not very good during the Deepwater Horizon oil spill, precisely because upper ocean flows are strongly influenced by atmospheric forcing and have complex turbulence; they are sometimes influenced by the Earth’s rotation, and sometimes they behave like flows in your coffee mug. In short, these flows are not well understood, thus cannot be modeled very accurately,” said Ozgokmen. “Our aim is to better understand ocean surface flows by releasing an unprecedented number of floating instruments that ‘go with the flow’ (like the oil). This is perhaps the most cost-effective method  to get a glimpse of how pollutants move at the ocean’s surface.”

The data derived from this fieldwork ultimately will be used in state-of-the art ocean models run by the Naval Research Laboratory and many scientists at the University of Miami.