Building upon its strategic objective to be the hemispheric university, the University of Miami Thursday opened a regional office in Mexico City, providing another gateway to Latin America to facilitate educational exchange, enhance research efforts, and convene and collaborate with top academic and health institutions throughout Mexico and Central America.

“The U seeks to promote partnerships and two-way movement of students, researchers, and innovators,” UM President Julio Frenk said in announcing the new regional office. 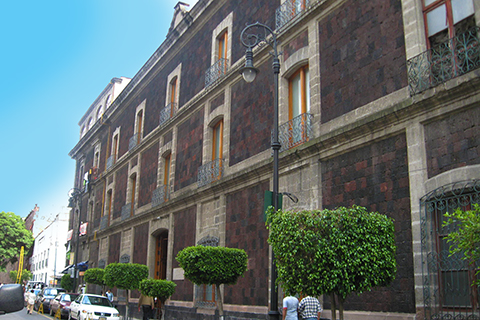 Frenk announced the opening of the office during a special showcase of Lo Mejor de la Universidad de Miami en México—The Best of the University of Miami in Mexico—at El Colegio Nacional in Mexico City. Addressing a distinguished group of 200 scholars, Frenk outlined the University’s vision for becoming the “hemispheric university,” including long-term plans for opening an additional four regional offices in strategic locations throughout Latin America and the Caribbean.

“Our presence will allow us to deepen research collaboration, particularly in areas where UM researchers are already active, such as climate change, urbanization, public health and well-being, journalism, anthropology, and mathematics, among others,” Frenk said.

The University celebrates its centennial in 2025, and during his tenure, Frenk has embraced the idea put forth by the University’s founders that the University of Miami is perfectly geographically positioned to be a Pan-American university. Located at the crossroads of the Americas in one of the most cosmopolitan cities in the world, a hemispheric mission involves not only bringing the world to the U but in bringing the University to the world.

Opening a regional office in the Roma Norte district of Mexico City—the most populous city in North America in a country with the region’s second largest economy—establishes a UM footprint that will focus on four major areas: educational exchange and mobility, research, technology innovation, and healthcare.

“The University is focused on building connective bridges across the globe, and the regional office in Mexico City is a tremendous first step to enriching the experience of not only our own students and faculty but those from across the region,” said Lourdes Dieck-Assad, vice president for hemispheric and global affairs.

Since launching the Office of Hemispheric and Global Affairs in 2017, Dieck-Assad has been working with UM schools, colleges, and centers of excellence to identify opportunities and promote hemispheric and global interactions in research, education, and service. In 2018, she led an initiative to establish a Hemispheric University Consortium, currently based at UM and embraced by leaders from 14 initial universities in Latin America, the Caribbean, Canada, and the U.S. The consortium is committed to facilitating problem-based alliances in education and research to generate the knowledge and solutions necessary to confront the key challenges facing not only the hemisphere but globally.

On Thursday evening, more than 150 special guests, including UM alumni, friends, and representatives of the administration and faculty attended the formal inauguration of the new office.

Henning Jensen-Pennington, president of the University of Costa Rica and one of the academic leaders who signed the consortium agreement, spoke at the event celebrated UM’s vision in promoting this level of collaboration among universities in the hemisphere.

“Today more than ever before, universities must unite and promote spaces for interchanges that are interdisciplinary and span borders,” he said. “The closer we can align ourselves, the more agile and expansive our efforts and responses to challenges will be.”

Frenk stressed that the University of Miami considers these collaborations with partner institutions as a relationship among equals, where the parties involved are subject to mutual benefit and mutual accountability.

“Universities have a great role to play as exemplary institutions that model the values we should all aspire to: reason, the search for truth, and respectful dissent and disagreement,” he said. Noting that students typically begin college at the same age they become active citizens, he stressed that “universities help underscore our similarities rather than our differences, and through our learning experiences, we become citizens not only of our own countries but of the world.”

At the El Colegio Nacional showcase, nine University of Miami faculty members presented their research that is currently being conducted in Mexico in partnership with other faculty or institutions. The partnership with El Colegio Nacional reinforces a bond the University of Miami established in 2017 when Frenk became the 101st lifetime member of the academy that brings leading artists and scholars from around the world together to promote the motto “freedom through knowledge.” (pictured at right: Rodolphe el-Khoury, Sallie Hughes, Felicia Marie Knaul, and Jorge Andres Fortun during a panel discussion held at  El Colegio Nacional)

Rodolphe el-Khoury, dean of the UM School of Architecture, discussed plans that are underway involving the school and UM’s Center for Computational Science to design a smart city called Zenciti in Mexico’s Yucatan region that will integrate technology into everyday life. This “Start Up City” prototype will be a living laboratory where the infrastructure promotes an ecologically sustainable and resilient future.

UM on Thursday also signed a Memorandum of Understanding with Jorge Ivan Espadas Espinosa, the founder and CEO of Urbetica, a smart cities technology integration firm.

“The support of Urbetica, the development force behind Zenciti, now allows us to continue to research and innovate in this area, at the confluence of urbanism and technology,” said el-Khoury.

Felicia Knaul, director of the University of Miami Institute for Advanced Study of the Americas, presented the final results of the Lancet Commission on Palliative Care and Pain Relief, a three-year project headed by Knaul and co-authored by Frenk, that found nearly 26 million people die suffering, most without a morphine tablet costing 3 cents that could alleviate their pain.

“Showcasing our faculty’s work before this important audience provided a sample of the University of Miami as a fountain of knowledge and understanding” Frenk said following the event.