In Washington, D.C., for a weekend getaway, graduate student Marissa Lisenbee stumbled on a most unexpected sight when she decided to explore the Smithsonian’s National Museum of American History last Friday. There, on the first floor, her physical therapy teacher was demonstrating an ingenious device that employs music to help amputees learn to walk again.

“I knew he was working on prosthetics, but I didn’t know what his project was,” said Lisenbee, who is in her second year of UM’s physical therapy program. “And I had no idea they would be there. I was really proud to see UM in the American History Museum.”

U Pride ran strong throughout the inaugural “ACCelerate: ACC Smithsonian Creativity and Innovation Festival,’’ which, presented by the Smithsonian and Virginia Tech, showcased the formidable creative and innovative muscle of the 15 universities in the Atlantic Coast Conference known for multiple national sports championships.

Among the 47 interdisciplinary projects selected by an ACC committee through a peer-review process, UM had three:

Of the 15 dramatic and musical performances presented over three days by some of the institutions’ most talented students, UM was the only school chosen to repeat its performance, a rousing tribute to Ella Fitzgerald commemorating her 100th birthday and performed by the Frost School of Music Jazz Concert Band and vocalists from its Vocal Performance Department.

For many museum-goers who, like Lisenbee, stumbled upon the extravaganza that took over the museum’s West Wing, ACCelerate was an eye-opening taste of the creative exploration and research at the nexus of science, engineering, arts, and design at ACC schools. But for the participants, it was an honor that elicited disbelief.

“A bucket list item you couldn’t dream up—something you never imagined would happen,” is how her instructor, Ignacio Gaunaurd, assistant professor in the Department of Physical Therapy, described the opportunity to demonstrate the Rehabilitative Lower-Limb Orthopedic Analysis Device (ReLOAD).

A first-of- its-kind collaboration among UM musicians, biomedical engineers, and physical therapists, the patent-pending ReLOAD system helps amputees develop correct walking patterns on their prostheses with a clever reward—music borrowed from their own playlist. Composed of an iPad and five miniature motion sensors, two embedded in a knee sleeve on each leg and one on the back, ReLOAD captures and analyzes the wearer’s walking motion, and through standard ear buds, distorts the music whenever their gait deviates from its normal stride. Augmenting the music are the corrective commands the wearer would hear from a physical therapist, were one present.

“There was nothing like this when I became an amputee,” said Jennifer Lopez, who lost her lower right leg in an accident three years ago and never tired of demonstrating the device over the three-day festival. “It’s a physical therapist in your pocket.”

The director of nursing operations at University of Miami Hospital, Lopez said she was fortunate to have regular physical therapy during her recovery. But many new amputees, including military personnel at nearby Walter Reed Hospital, which is collaborating with UM on a ReLOAD study, often wait months for appointments, making ReLOAD an extraordinary asset. 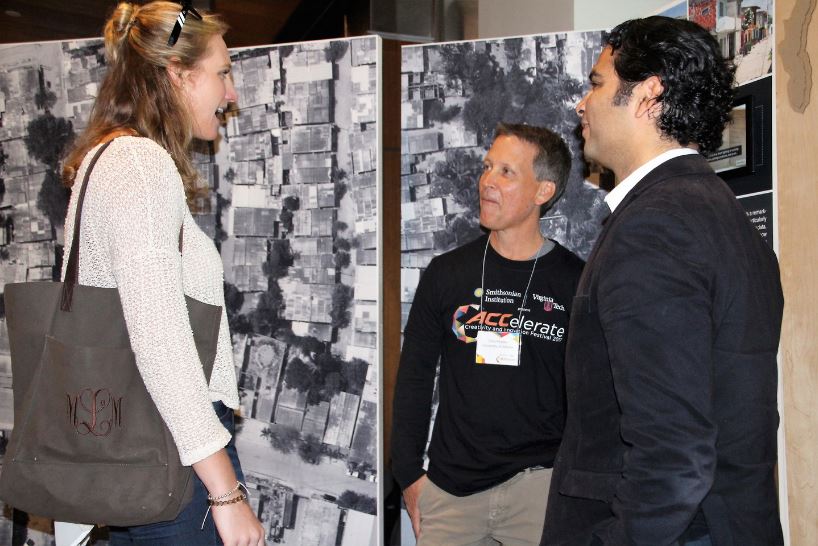 On the second floor, where the Frost Concert Jazz Band was warming up under an abstract sculpture of the Star Spangled Banner, Lisenbee followed the U to the exhibit on Digital Mapping of Informal Cities. She would leave impressed by the collaborative efforts of UM architects, computer software engineers, and geographers to document communities that are literally off the map—and thus lacking essential services—with drone-based aerial photography and computational methods.

Just as amazing for the School of Architecture’s Adib Cure was the learning experience of translating his largely digital work and that of his wife and fellow architecture faculty member Carie Penabad, the Center for Computational Sciences’ Amin Sarafraz and Chris Mader, and UM Libraries’ Tim Norris, into a publically accessible form. Their exhibit included videos, touch screens with interactive graphics, and architectural models that brought to life the startling fact that the world’s population today is more urban than rural, and a billion people live in the kind of informal but vibrant and sustaining settlement they and many UM students helped map outside Barranquilla, Colombia.

“It’s fantastic,” Cure said. “It allowed us for the first time to put our work together as an exhibit and to share it with thousands of people in a short time. Hopefully some of them leave with an awareness of these places, and that technology can improve the quality of life for the people who live there.”

Making her way to the third floor, where the Earth Echo virtual reality experience was located, Lisenbee was a tad disappointed. The exhibit was mobbed by kids, and she didn’t have the opportunity to don the VR goggles that would transform her into a baby whale and test her skill at navigating and hunting fish and octopus with echolocation.

But the excitement of the kids conveyed the value of the game that was originally conceived and created during the 2017 Global Game Jam by a School of Communication team of students which, led by Assistant Professor Lien Tran, had 48 hours to work their magic.

“I’ve heard of sonar but I didn’t know we got it from animals,” said 10-year-old Owen Calvert, visiting Washington from Winston-Salem, N.C., with his brother, Owen, 5, and their parents, Connie and Hayes.

And that was the point for student game developer Todd Heino, a second-year M.F.A. in interactive media student who was awed by the opportunity to share the U’s talents at such a venerable venue. “Wow—the Smithsonian. It hasn’t really hit me yet,” he said.

One floor below, band director John Daversa told a gathering crowd that would soon know why the Frost Jazz Concert Band is the nation’s most acclaimed college jazz ensemble, that it was an honor to play at such a ‘‘holy premises.’’

“It’s sacred territory,’’ Daversa said. “We walk in and there’s Herbie Hancock’s guitar. “You see the reverence for the history we came from, and you know there may be some 8-year-old in the audience seeing his first baritone sax player and that’s as inspiring as this place.”

For more information about the festival, which was presented by Virginia Tech’s Institute for Creativity, Arts, and Technology and the history museum’s Lemelson Center for the Study of Invention and Innovation, visit acceleratefestival.org.

SOURCE  “Celebrating Innovation and Creativity in Our Nation’s Capital” by Maya Bell | October 15, 2017